- April 01, 2020
It does seem like we'll be social distancing for a while!  It's somewhat nice to not have meetings to go to three and four days a week, but even someone as introverted as me does start to miss it a bit!  Technology to the rescue, though.  I video chatted with Aunt Bev last night, which isn't something I normally would have done (why not?? I ask myself!) and that was a lovely chat.  We're trying to video chat with my parents regularly, too.

I am making more progress, although I'm working a heck of a lot more than I would like!  I think it's going to slow down as we get into the new normal, but for the past two weeks I've spent hours, literally, each day in video conferences.

And trying to keep up some sort of school with the kids is challenging.  Hubby is finally home some, although his company is being less than stellar about everything.

I finished one customer quilt, a wall hanging.  Since I had the time I did a lot of detail work.  I hope she likes it, as a lot of work went into it.  She gave me free reign so I went a bit nuts.  Hopefully she doesn't regret her decision!

I've broken out some old UFO's.  The Quilter's Garden Patch was taken over by Mom, who has done an absolutely fantastic job with it.  She's added a couple of extra blocks to make it bigger, and it looks incredible!  I finished up the four-patch quilt, so it's ready for the long-arm.  I just moved Fabulous Flowers from the UFO to the Piecing list, as I've moved it to the active pile.  Still debating final design, but it's getting there!  It will at least be something soon, I swear.  And I WILL get started on it before I start cutting that new one.

Popular posts from this blog

Another year of Quarantine 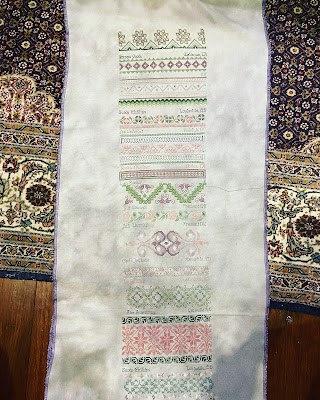 The vaccine is rolling, out, but OH SO SLOWLY.  And I'm about dead last on our priority list (as it probably should be - no complaints!) so I just need to keep on going.  I've felt the need for some slow stitching recently, which has done good things for the progress on a lot of old cross stitch UFO's.  I finished the Band Sampler that I did as a round robin a while ago.  It's beautiful, but with Mary Ellen gone I'll have to spend a LOT more than I used to to get it framed!   I've also completed "A Little Quakeresque" sampler - such a lovely project!  And my "12 Days of Christmas" piece is done as well, although I did have to order more floss.  I think it might end up as a pillow cover?  I can't think of a place to hang in during the holidays.    My piecing list is actually pretty under control for a change.  I decided to join in on a quilt along for "All the Good" and I absolutely LOVE how it's turned out.  It was part of a
Read more 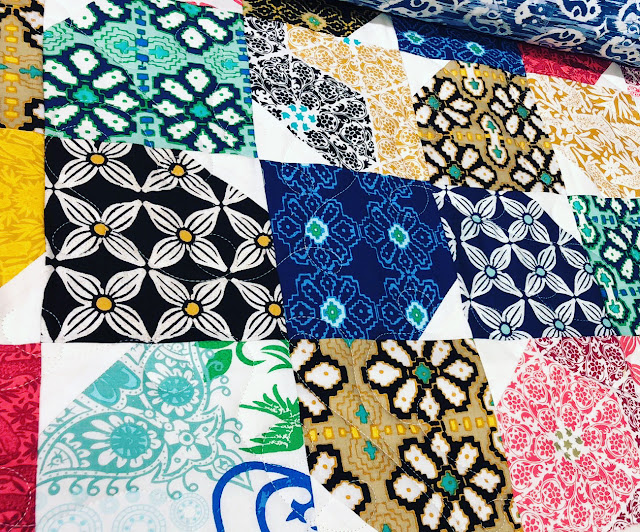 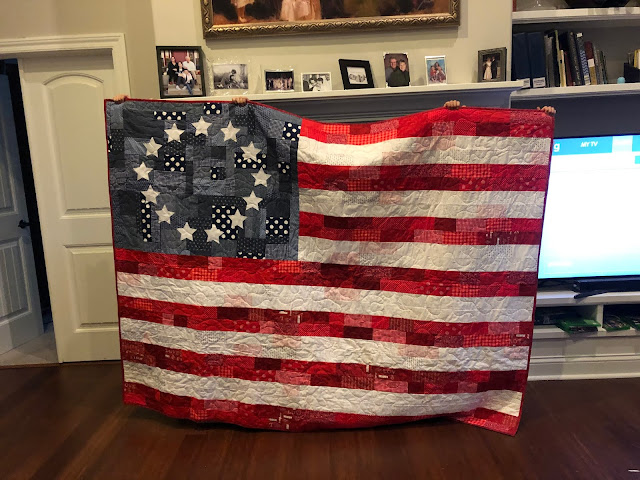 One can only hope that with 2020 on the way out, things will start to look up.  We shall see!  A few finishes here and there. The flag quilt was finally done.  The elementary set isn't the greatest for holding up quilts, but they did their best!  I love how this one turned out.  The pattern was my own, and the customer loved it.  Flag Quilt Commission Finished!  I finished Grandma's wall hanging, unfortunately a little too late.  She saw the top, and loved it.  She fell into a quick decline shortly thereafter and passed away without ever seeing the final result.  The finished quilt was displayed in her coffin, and my aunt asked that it be buried with her.  I agreed.   Grandma's Quilt - mostly finished This was a fun project!  I took the color palate directly from my partner's feed, and I love how it turned out.  Had some fun with the quilting and my partner was happy.   #skinnystrippyswap  This was a loooooooooooonnnnnnngggg term UFO that I finally finished up.  I quilt
Read more