Showing posts from June, 2013
Show all

No finish for this Friday

- June 28, 2013
I know it seems like such a cliche, but where the heck did June go??  I swear, this summer is flying by.  Marc leaves in early August for Rhode Island, then takes off for California for the foreseeable future.  I know it's the best course for long term, but that doesn't mean it's going to be easy.  And he seems to be gone so much this summer.  I know he loves to do RAGBRAI, and he really needs to go see his Dad this weekend, but it's still hard.  I want to have some time for the two of us, and that's not proving easy to find.  I'd love to go to Chicago for a weekend.  And we need to get a day where we can take Isadora to Adventureland.  I finally got back in the craft room for a few minutes last night, and made some progress on the pintuck shirt.  Up next is the collar, which should be fun.  It's a mandarin collar, and it's been a while since I've done one.  But the shirt seems like it's going to fit well, so I'm pleased.  I'm having a
Post a Comment
Read more

- June 19, 2013
I finally got back into the sewing room last night, and stayed up later than I should have.  But it was worth it!  I finished the top of the baby quilt, and finished the black and white shirt completely.  I might use that pattern again, but will definitely think more about the fabric!  It was a slinky rayon, and since the whole thing is cut on the bias, a bear to work with.  I'm not sure how well it will last, either.  The threads pull easily - I marred it several times just sewing hems.  But it's finished, so lessons learned!   Just keeping myself honest -- Recent Completions: Stacks of Color Black and white shirt WIPs: Farmer's Wife (LONG term project!) Fat Quarter Shop BOM (TWELVE of twelve completed!!) Ruby, Pearl and Opal (waiting for my bee blocks) Craftsy QAYG quilt Pin tuck shirt Top Completed, waiting for quilting   Summersville Crinkle Swoon Summer Breeze Jewels Salad Hugs and Kisses Basic Math Planning: Heart of Mine
Post a Comment
Read more

Starting the Week Over

- June 18, 2013
Yesterday certainly did NOT go as planned.  I had to play piano at a funeral, for starters.  For someone that I admired a great deal, liked a lot, and have known since I was 6.  She was only 58, and passed away from a massive heart attack after singing at a funeral.  She was far too young, and she will be greatly missed in my small parish.  The funeral went well, and I took the day off of work to attend, play piano, and help in the kitchen. I had decided to take the rest of the afternoon off, instead of trying to get back to work.  I was going to go home, get in a nice workout, and treat myself to several uninterrupted hours of sewing, before getting the kids, picking up the sitter, and having a pleasant evening at quilt guild.  Well, THAT didn't happen.  I hadn't been home for 15 minutes when Isadora's Y camp called, and said that her foot appeared to be infected.  She'd gotten a splinter the night before, and although it came out cleanly and it hadn't bothered h
Post a Comment
Read more

This and that and progress 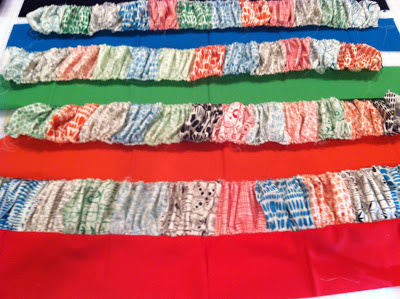 I had another project jump the queue.  I have a brand new nephew, Adric, and I hadn't really thought about making him a quilt.  I'm not sure why, although the fact that his grandmother (my sister's MIL) is an amazing quilter herself and probably has something in the works for him might have had something to do with it!  Grandma Susan is amazing (we've pretty much adopted her into the family).  She is the one who encouraged me to start quilting, so I'm forever grateful to her! But back on point, I decided that a baby can't have too many blankets, and started to whip one up.  Most of my fabric is decidedly more feminine, but I did have a stash of some Summersville, with matching solids, that has been waiting for inspiration to strike.  A quick trip to the Moda Bake Shop, and Summersville Crinkle is in the works.  The pattern calls for using the tension method for creating the ruffles.  I'd never done that before, but decided to give it a whirl.
Post a Comment
Read more 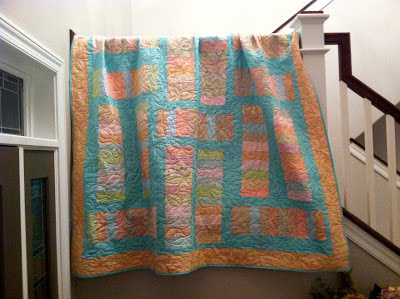 An actual full-fledged finish!  And it didn't take me weeks to get a picture of it, either. :)  This is stacks of color, from one of the Pam Lintott jelly roll books.  Jelly Roll Dreams, I believe.  It's made of a Kashmir jelly roll.  I love the colors in this one. The quilting is a great flower design.  The lovely woman who long-arms them got a new Intelli-quilter (I think that's what she called it) and has tons of new designs.  I tend to like all over patterns, and this one suited the quilt quite well.   Here's Juliet checking out the latest creation.  Since my hubby is gone during the week, she's generally my company in the quilting room.  She loves to sleep in the scrap bin. My daughter has been at Mom's all week, since her summer daycare doesn't start till next Monday, and school finished last Monday.  I miss having her around!  But Gunner and I have been enjoying ourselves.  I think he kind of likes having the place (and Mom) to hi
6 comments
Read more 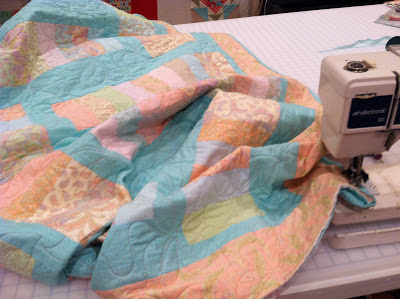 Seems like I never get enough time to do all the sewing I would like!  Somehow I never manage to get any done on the weekends.  DH is only home on the weekends, so I like to spend the evenings relaxing with him instead of down in my craft room.  But I'm still making bits of progress! Recent Completions: Flowered shirt WIPs: Farmer's Wife (LONG term project!) Fat Quarter Shop BOM (eleven of twelve completed) Ruby, Pearl and Opal (waiting for my bee blocks) Craftsy QAYG quilt Basic Math Top Completed, waiting for quilting Swoon Summer Breeze Jewels Salad Hugs and Kisses Waiting for Binding: Stacks of Color (In progress! I only need another 20 minutes or so to finish!) This one is going to niece Fiona.  She was just displaced as baby of the family, so I think she could use a special gift! Planning: Heart of Mine 2 Simply Woven Lucky Pezzy
1 comment
Read more
More posts